Canoeing, Rafting, and Kayaking on the Illinois River
Connect with us! 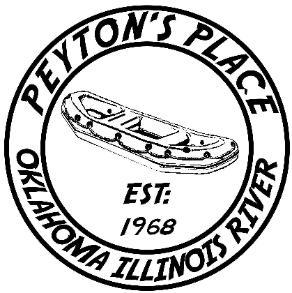 Canoeing, Rafting, and Kayaking on the Illinois River

Location
10298 Highway 10, Tahlequah, Oklahoma
Image may be subject to copyright

Canoeing, Rafting, and Kayaking on the Illinois River

Peyton's Place Resort, Inc opened for business in May, 1968, as a restaurant and rental cabins on the west bank of the Illinois River just outside Tahlequah, Oklahoma. Starting with just a few jon boats to rent to fishermen seeking the small-mouth bass and other game fish of the Illinois River. Peyton's Place acquired canoes in the early 1970's and began service as a canoe livery for fishermen as well as recreational paddlers wanting to enjoy the scenic beauty of a true gem in the foothills of the Ozarks.

Peyton's Place was the first canoe livery operating on the Illinois River, and has continued the family-owned and operated business since that start more than 52 years ago. In about 1990, Peyton's Place acquired rafts for the benefit of those wanting a leisurely float trip down the river, and quickly expanded the line to include kayaks for individuals or groups wanting a faster paced trip down the river.

In 1996, Peyton's Place opened a bunkhouse lodge to cater to large groups seeking indoor accommodations in a common setting. The lodge can sleep up to 48 people. Two dormitory-style rooms include a large dressing area and private restrooms and showers. A meeting area, common dining area, kitchen, and a wood-burning fireplace are centrally located for those cozy fall and winter nights on the river. In 2001 a small RV park was installed in the campground and in 2011 electric tent camping sites were installed. The RV park was expanding to (19) full hook up sties in 2014.
Guests
Adults
Children
Pets
Unit Type
Check Availability